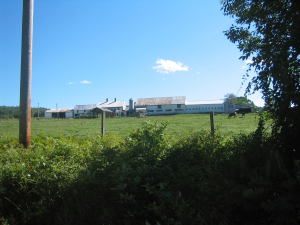 George W. Corliss Jr., 81, a lifetime resident and family farm owner in Northfield, passed away on Tuesday, May 31, 2022 at Concord Hospital-Laconia, after a long illness. He was born in Laconia on July 25, 1940 the son of  George W. Sr. and Hazel A. (Hawkins) Corliss.

George was a graduate of Tilton-Northfield High School, class of 1959. He was the owner and operator of The Corliss Farm on Shaker Road in Northfield. George worked on the farm from the time he was a young child until a month before he passed. If you asked him about it he would say, "he never worked, all he did was chores" and never complained about it.

George was never the person in the spotlight but behind the scenes he did all he could for the Town of Northfield and it's residents. He was a member of the budget committee from 1980 until 2021, was active with the boy scouts and was a member of the Farm Bureau. He could be often be found riding his tractor from the farm or at a meeting in town hall, but he wouldn't be seen without his yellow hard hat on.

He was predeceased by his parents and his son, George W. Corliss III, who died in 2008.

A funeral service will be held on Tuesday, June 7, 2022 at 10:30 AM at the William F. Smart Sr. Memorial Home, 584 West Main St., Tilton. Burial will follow the service in Calef Cemetery in Northfield.

To send flowers to the family or plant a tree in memory of George W. Corliss Jr., please visit our floral store.

A Memorial Tree was planted for George

We are deeply sorry for your loss - the staff at William F. Smart Sr. Memorial Home

Join in honoring their life - plant a memorial tree