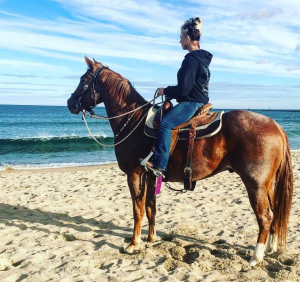 Stevie Lee Dross, 26, of Northfield, passed away peacefully surrounded by loved ones Wednesday, September 12, 2018 following  a long, but brave battle with cancer.

Stevie was born in Manchester, NH July 24, 1992, daughter of Steven E. and Bobbi Ann Dross-Bourbeau. Stevie’s childhood years were spent on her parent’s dairy farm in Long Prairie, MN. She moved with her family to Holderness, NH in 2001 where she attended Holderness Central School and later graduated from Plymouth Regional High School. Stevie had strong compassion for animals and spent several years as a veterinarian technician at Northern Lakes Veterinary Hospital.

Stevie, a free spirit who grew up caring for and competing with horses, was often commended on her horsemanship skills. Stevie moved from Holderness to Northfield five years ago to live with her fiance Garth DuBois and later stayed at home to raise their beautiful daughter Miranda Beryl, immersing her in Stevie’s cowgirl lifestyle.

Services are planned for  Monday, September 17, 2018 at the Longlook Farm, 195 Knox Mountain Road in Sanbornton, NH 03269. Viewing will be from 1:00 to 3:00 PM with a service following at 3:30 PM. Afterwards, friends and family will be directed to the barn for refreshments and to celebrate Stevie’s life. A private burial for her family will be held at a later date.

To send flowers to the family or plant a tree in memory of Stevie Lee Dross, please visit our floral store.