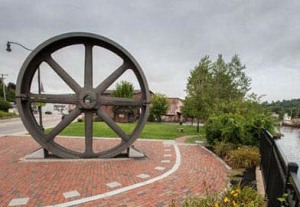 David A. Hurst, 78, a resident of Franklin passed away at home on Tuesday, August 6, 2019 after a year long battle with ALS.  David lived in Vermont before moving to Franklin in 1965.  David was born in Wolcott, Vermont on May 23, 1941 the son of Earl F. and Gertrude F. (Allen) Hurst. He was a veteran of the U.S. Navy. Following his honorable discharge from the Navy he worked for The Palazzi Corporation in Hooksett. David started as a laborer and over his 30 years with them, became general manager. In 1979 he purchased Beck & Bellucci Inc. which over the last 40 years has grown to be a premier and well respected bridge building company. This month David and his wife celebrate their 40th anniversary as owners of Beck & Bellucci.  David and his wife also own Miller Construction in Windsor, Vermont.

David always had a positive outlook and with that attitude he and his wife Carolyn made countless efforts to improve and beautify the city of Franklin.  In 1999 both David and Carolyn were honored as Citizens of the Year.   Over the years, David was an active member of the Franklin Outing Club, Winnipesaukee River Trail, NH Good Roads, Franklin Opera House and Kearsarge Mountain Boys as well as supporting numerous other community organizations.

He was predeceased by his parents and a sister, Carolyn Hale

He leaves his wife of 54 years, Carolyn M. (McFeeters) Hurst

Daughters, Ellen L. Hurst and her partner Mike Szanto of Franklin and Susan L. Calley and her husband Jeff of Franklin

Brother, Clifford Hurst and his wife Meng Qi of Manchester, NH,  William Hurst and his wife Sheila of Gilmanton, NH, Sister, Marjorie Fitch and her husband David of Calais, VT and Brother in Law, Larry Hale of Florida along with several Nieces and Nephews

Calling hours will be held, Friday, August 9, 2019 from 4:00 to 7:00 PM at the William F. Smart Sr. Memorial Home, Franklin-Tilton Road (584 West Main St.) in Tilton, NH.  A funeral service and celebration of David's life will be held Saturday, August 10, 2019 at 11:00 AM at the Congregational Christian Church, UCC, South Main St. Franklin, NH. Burial with military honors will follow at Franklin Cemetery.

Expressions of sympathy may be made in David's name to the Franklin Outing Club, C/O Kathy Fuller, 200 Prospect St., Franklin, NH 03235.

To send flowers to the family or plant a tree in memory of David Alan Hurst, please visit our floral store.